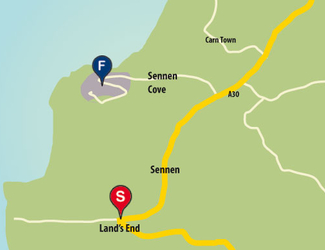 Land's End is the most westerly part of the British Isles and boasts some spectacular scenery. Land's End has a hotel, several shops and cafes, toilets, a visitor centre and pay and display parking, providing the ideal place to start your walk to Sennen Cove. The walk to Sennen Cove, rounding Dr Syntax's Head, is fairly easy. Points of interest along the way include the remains of the Iron Age Maen Castle, now owned by the National Trust, the old lookout station (also now owned by the National Trust) and a lifeboat station. Longships Lighthouse can be seen from the lookout station, and keep an eye out for the Irish Lady just below the cliffs - this rock is said to be named after the sole survivor of shipwreck on these cliffs many years ago. Further along, there are magnificent views down to Whitesand Bay at Sennen Cove.