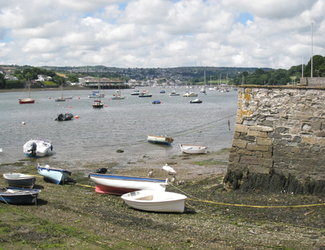 Flushing, near Falmouth, was named so after a Dutch community from Vlissingen - also known as Flushing - settled here in the seventeenth century. The Spanish Armada intended to land in Flushing when attacking England, but they were unable to capture the village. Shipbuilding and repair was once the main trade in Flushing. Today, Flushing has narrow streets lined by Queen Anne style houses which were once the homes of Falmouth Packet captains. There is a passenger ferry from Flushing Quay across the narrow Penryn River to Falmouth. Flushing has a riverside pub, the Seven Stars. The beach at Flushing is small and sandy.