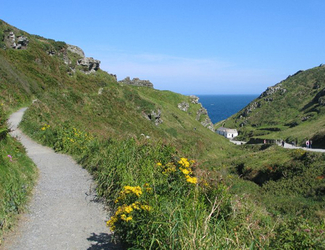 Tintagel is known as King Arthur Country. Legend has it that King Arthur died at Slaughterbridge, but his spirit returned to Tintagel, where his fortress once stood. The fortress has long ceased to exist, and Tintagel Castle was built – according to legend – on the site around 1140AD by Earl Richard of Cornwall. Today, the ruined castle is owned by the Duchy of Cornwall and managed by English Heritage. On Tintagel Island stand the remains of a Celtic Monastery, underneath which run two tunnels. The larger tunnel is called Merlin’s Cave, and is said that Merlin’s spirit still frequents the tunnel. In the town, the old Post Office - originally a fourteenth century manor house – has been carefully restored and is now owned by the National Trust. Tintagel also has an Arthurian Visitor Centre, several cafes, restaurants and pubs and gift shops. The coastline around Tintagel is beautiful and dramatic, and there is ample opportunity for walking. There are also many good beaches along this coastline, including Bossiney and Benoath Cove. Tintagel Carnival is held each August.