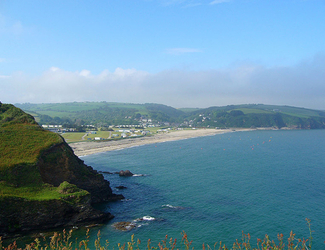 Pentewan Village is a typical, pretty little Cornish village. Pentewan (from the Cornish ’Bentewynn’) is three miles south of St Austell and lies at the mouth of the river. It has a harbour-side pub (The Ship Inn), a Post Office and some shops and the nearby white, sandy beach is a must-visit for any visitor. Although the Caravan and Camping site “Pentewan Sands” has dominated the area since 1945, outside of peak holiday seasons, it is open to the pubic to use their facilities (restaurants, gym, sauna, swimming pool, bar). The beach is accessible if you park in the village and walk down during the peak holiday periods, but it is more easily accessible from Pentewan Sands at other times of year. In medieval times, Pentewan and its harbour was primarily a fishing community with some stone-quarrying, tin-streaming and agriculture too. A local land and quarry owner rebuilt the harbour between 1818 and 1826 to improve the pilchard-fishery and to essentially turn Pentewan into a major china-clay port. For a litte more than a century, Pentewan used to ship a third of Cornwall’s china-clay but difficulties with silting, caused by tin and clay mining meant that custom was lost to the rival ports of Charlestown and Par. Sadly, throughout the twentieth century the harbour gradually silted up and became cut off from the sea as it is today; small fishing boats unable since the 1960s to use the harbour. It is possible to cycle and walk along the old railway line from London Apprentice to Pentewan. This line was built in 1829 and that was used for transporting china-clay and tin from St Austell moor and Polgooth mines respectively to the harbour and coal inland. Pentewan Quarry produced a variety of “Elvan” stone which was used to build an abundance of local medieval Cornish churches including Lostwithiel, Mevagissey, St Austell, and St Columb Major. Anthony House was also partly constructed from Elvan stone during the 18th century. St Austell church was restored with some recovered stone from the beach in 1985. Many of the local buildings have some Pentewan stone in their construction. Pentewan had two stream works for tin: Happy Union and Wheal Virgin. Both the streamers have uncovered charcoal ashes, human remains and animal bones and were believed to be places where “the old men had been”. They have both been out-of-use since 1874. During the second world war, a pill box was placed in the harbour and the beach provided ample ground for ‘dragon’s teeth’ anti-tank defences. In 1941 bombs fell near Pentewan and the air raid in August 1942, destroyed the Chapel and damaged houses.